Are Financial Scandals the New Normal?

Once again the spotlight shines brightly upon accounting manipulations and the role of auditors following the collapse of large international organisations, such as that of global travel group Thomas Cook in 2019.

In these instances Parliamentary and financial watchdogs begin to ask awkward questions of a company’s senior executives and its accountancy firms. Patisserie Valerie, Carillion, and Tesco are examples of recent corporate scandals, to which we can add the manipulations of the foreign exchange markets, and the mis-selling of financial products. These are all part of a catalogue of scandals over recent years in which financial manipulation has occurred to the detriment of investors, customers, and the wider public.

Are we living in a new age of financial scandal?

Recent research suggests that this is indeed the case. Through my research I have examined instances of fraud and financial scandals dating over the last two centuries and documented the highs and lows of corporate scandal. 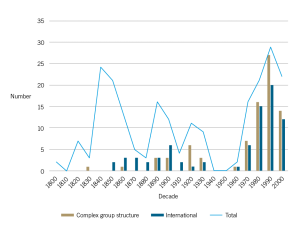 The trends show that the incidence of financial scandals varies dramatically over time. The mid 19th century was the first significant peak. For the first time railways and banks became limited liability companies, creating opportunities for share-pushing schemes and embezzlements. Regulators successfully cracked down on these abuses, leading to a steady decline in scandals.

The most remarkable trend was the low point of the mid 20th century, when financial scandals virtually ceased. A resurgence began in the 1970s and exceeded the previous 19th century peak in the 1990s.

While the mid-century low is associated with the tightly controlled post-war economy, the recent peak is coupled with prominent aspects of market liberalisation. The government lifted currency exchange controls in 1979. Before then it had been difficult for fraudsters to move funds from one country to another without limit.

In parallel, offshore jurisdictions found a new rationale as tax havens, providing facilities to set up companies with the beneficial ownership kept secret. Post-1980 financial scandals differed from earlier scandals by having a significant international dimension, and tax havens like Panama and the Cayman islands featured in a majority of the cases.

Another significant change has been the deregulation of the banking and financial services sector. Authorities have reduced separations between commercial and investment banking. Meanwhile, opportunities to launch and sell new financial products without scrutiny have increased, and attempts to limit insider and unauthorised trading have proved mostly ineffective.

The rise of financial services

During recent decades, finance, financial services, and associated consultancies have become more prominent. Anyone looking to set up a complex web of interrelated businesses with an international dimension featuring secrecy jurisdictions, for tax avoidance, or any other reason, is not short of potential advisors.

Whereas the number of individuals predisposed to fraud has probably not altered much over time, the opportunities available to these individuals have changed dramatically. The economy has shifted from being tightly regulated with a focus on industrial activity, to being dominated by banking and financial services.

The recent rise of financial scandals is another side effect of the unbalanced nature of the British economy. Even with some moves to address the balance, financial scandals are likely to remain a feature of the business landscape. Auditors are still effective at mitigating fraud in simple, single-unit companies, which were universal until the early twentieth century.

The reality of modern business, however, is that corrupt individuals can set up complex webs of interrelated businesses to escape scrutiny – funds can be moved through these structures and laundered quickly across international borders. Banking in particular is vulnerable to scandal.

In the face of these challenges, national level regulators are increasingly ineffective. International regulation may be the only possible solution. In the absence of an effective international response, and there are some very significant obstacles, financial scandals are set to be the new normal for some time to come. Talent Development in the Exponential Age